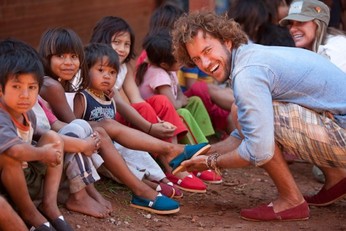 ﻿TOMS began in 2006 when its founder
Blake Mycoskie traveled to Argentina and saw countless children walking around barefoot. Mycoskie began noticing that the people with shoes were all wearing a similar one -- the alpargata. After meeting an American woman hosting a shoe drive, he was inspired to start a business with the One for One model in mind. He decided that for every pair the company sold, they would give one to a child. Before he flew home, he was able to have 250 sample shoes created.  He launched TOMS with only himself and three interns working at the company in his Los Angeles apartment.  After selling 10,000 pairs, Mycoskie, his family, and a few others traveled to Argentina to do their first shoe drop -- where they passed out the shoes to many children in need.  Seven years later, the company has grown and has given away thousands of shoes throughout the world. The TOMS brand began as a company, but has become a story and a worldwide initiative to look for ways to give back.
TOMS founder Blake Mycoskie chats with popular talk show host Ellen Degeneres about the importance of having a story behind a brand. In this video, he remembers a defining moment at an airport that helped mold the business into what it has been known for today. 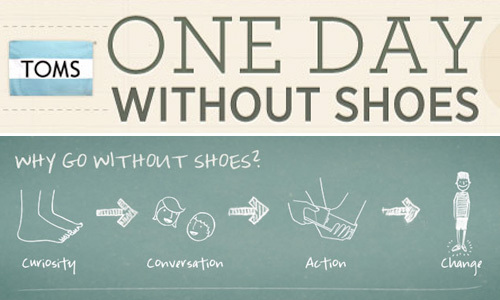 The TOMS story has inspired many people. In 2007, a group of students attending Pepperdine University were inspired by TOMS and started the One Day Without Shoes campaign. Seven years later, in 2014, the campaign has grown and has become an annual event for the TOMS company.


People participate in it internationally by walking barefoot to help raise awareness. This event shows that anyone can start something and make a difference!