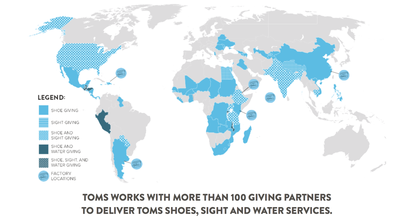 From TOMS Corporate Website
TOMS works with nearly 100 Giving Partners and numerous volunteers to supply developing communities with shoes. These shoes are delivered with the intentions of alleviating some of the symptoms associated with extreme poverty levels. While infections and disease due to lack of shoes are an issue in these countries, it is important to notice that shoes are simply a 'band-aid' fix to a much larger problem.

As noted in the map above, TOMS currently has six manufacturing facilities across the globe. The largest of these resides in China. As a response to critics claiming the business was not helping to create jobs for these communities, Blake Mycoskie began opening factories in the areas that were receiving shoe donations. These areas include Argentina, Kenya, Ethiopia, India and most recently Haiti. Although there are facilities producing shoes in these developing nations, the shoes that are purchased by consumers are strictly manufactured in China. This is due to the differing levels of quality needed to meet the standards of the fashion focused buyers.

﻿Following the devastating earthquake in Haiti in 2010, former President Bill Clinton encouraged Blake Mycoskie to donate pairs of﻿ ﻿TOMS﻿ ﻿to the Haitian people. After donating thousands of shoes, Mycoskie decided to take the next step forward and begin further community development by starting a manufacturing facility in the country's capital Port-au-Prince. As mentioned in the video above, Mycoskie says that creating jobs is extremely important for the country of Haiti to rebuild itself after the natural disaster. ﻿